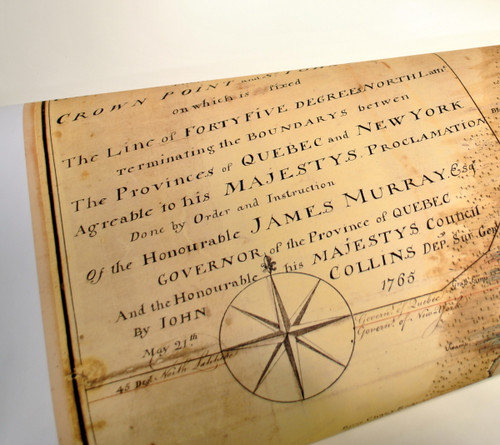 Just about every American knows at least part of the story of our Revolutionary War.

You'll lose most of them there!

Yet our lake was crucially involved in the American victory!!  The British viewed it as a perfect way to bring their blue water navy right in the back door of their upstart colonies. They envisioned a squeeze play...front and back...to snuff out the rebellion.

But the lake was new territory, and nearly unknown to the British admirals. Fortunately, they had a map. It had been completed 10 years earlier by Deputy Surveyor John Collins in May, 1765, after two years of arduous outdoor work.

Printed color copies of Collin's map survive today in our store.  To the best of our knowledge, it is the ONLY single page large format map of the full lake.  At 20''W x 52" H, it will make quite a statement in any city room or on your lake cottage wall. Also available in 13'' x 34''.

The map was originally hand-drawn and colored.  It is a stunner, and also remarkably accurate.