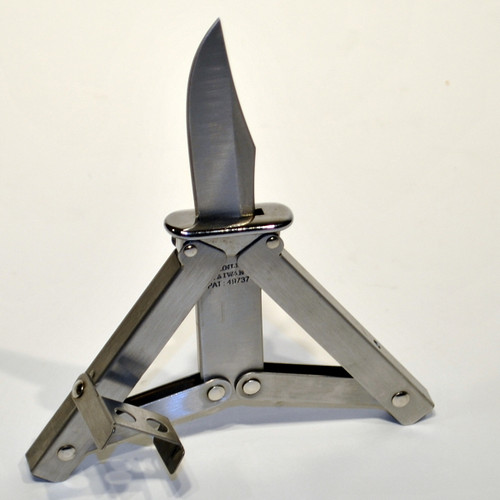 The Fury Paratrooper Pantographic Knife is a folding knife whose blade is opened by a unique scissors method. Click under the image to see the knife engaged and open!

The blade has a slightly longer tang than a folding knife heel. The handle is symmetrically segmented and articulated to fold away on both sides to grip the longer tang. The manner is similar to a balisong knife (also called a butterfly knife in western countries) with which it is often confused. Unlike the balisong knife handles that swing freely and independently, the pantographic knife uses a pantograph linkage to keep the handles aligned during opening and closing.

The Fury Pantographic knife is very strong when compared to most other folding knife designs, being joined at several points and along several planes - this increases the force required to break the blade away from the handle. By enclosing the blade on both sides, double edged blades can be used.