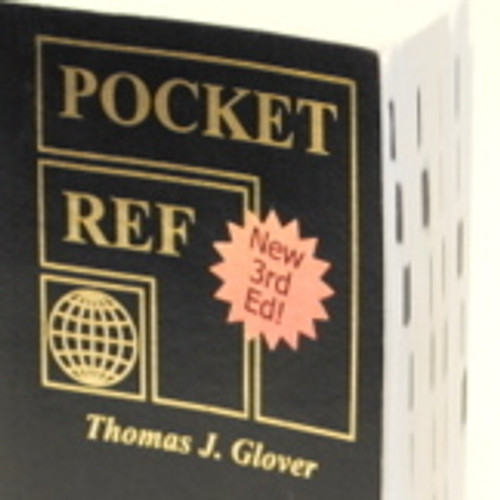 Along with a striking just-add-water personal assistant, this is one of those oh-so-rare items that should be in the trunk that accompanies you to a desert island.

The world-famous Thomas J Glover Pocket Reference Manual is a survival/dictionary and veritable encyclopedic pocket rocket.  The entire 768 page book is no bigger than two Snickers bars, yet offers just about any information you need to function on this planet...except marital advice! Learn about wiring, weights and measures, weather, carpentry, chemistry, first aid, general science, knots, metalurgy...and so much more

The Pocket ref is the PERFECT gift for the person who already has everything...and it reminds us of a story...

An ambitious yuppie finally decided to take a vacation. He booked himself on a Caribbean cruise and proceeded to have the time of his life... at least for awhile. A hurricane came unexpectedly. The ship went down and it was lost instantly. The man found himself swept up on the shore of an island with no other people, no supplies, nothing. Only bananas and coconuts. Used to 4 star hotels, this guy had no idea what to do. So for the next 4 months he ate bananas, drank coconut juice, longed for his old life, and fixed his gaze on the sea, hoping to spot a rescue ship.

One day, as he was lying on the beach, he spotted movement out of the corner of his eye. It was a rowboat and in it was the most gorgeous woman he had ever seen and she proceeded to row up to him.  In disbelief, he asked her: "Where did you come from? How did you get here?"  "Rowed from the other side of the island," she said, "I landed here when my cruise ship sank." "Amazing," he said, "I didn't know anyone else had survived. How many of you are there? You were really lucky to have a rowboat wash up with you."  "It's only me," she said, "and the rowboat didn't wash up with me, nothing did." He was confused, "Then how did you get the rowboat?"  "Oh, simple." replied the woman, "I made the rowboat out of raw material that I found on the island. The oars were whittled from gum tree branches, I wove the bottom from Palm branches, and the sides and stern came from a Eucalyptus tree."

"But  that's impossible," stuttered the man, "you had no tools or hardware. How did you manage?" "Oh, that was no problem," replied the woman, "on the south side of the island there is a very unusual strata of alluvial rock. I used that for tools, and used the tools to make the hardware. But, enough of that," she said, "Where do you live?"  Sheepishly, he confessed that he had been sleeping on the beach the whole time.

"Well, let's row over to my place, then," she said. After a few minutes of rowing, she docked the boat at a small wharf. As the man looked onto shore he nearly fell out of the boat. Before him was a stone walk leading to an exquisite bungalow painted in blue and white. While the woman tied up the rowboat with an expertly woven hemp rope, the man could only stare ahead, dumbstruck. As they walked into the house, she said casually, "It's not much, but I call it home. Sit down please; would you like to have a drink?"

"No, no thank you" he said, still dazed. "I can't take any more coconut juice."  "Oh it's not coconut juice," the woman replied. "I have a still. How about a Pina Colada?"

Trying to hide his continued amazement, the man accepted, and they sat down on her couch to talk. After they had exchanged their stories, the woman announced, "I'm going to slip into something more comfortable. Would you like to take a shower and shave? There is a razor upstairs in the cabinet in the bathroom."

No longer questioning anything, the man went into the bathroom. There, in the cabinet was a razor made from a bone handle. Two shells honed to a hollow ground edge were fastened on to its end inside of a swivel mechanism. "This woman is amazing," he mused, "what next?"

When he returned, she greeted him wearing nothing but strategically positioned vines and smelling faintly of gardenias. She beckoned for him to sit down next to her.

"Tell me," she began, suggestively, slithering closer to him, "we've been out here for a very long time. You've been lonely. There's something I'm sure you really feel like doing right now, something you've been longing to do for all these months? You know what I'm thinking, don't you?" She stared into his eyes.